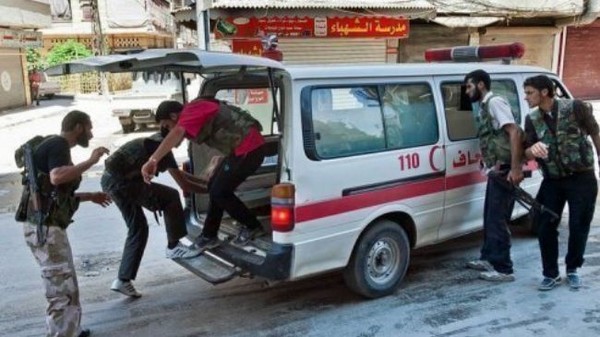 Turkish ambulances used to transport weapons to terrorists in Syria, in violation of Geneva Conventions, according to Russian reports. NATO officials refuse comment?

Συγκαλύπτουν εγκλήματα και είναι καταδικασμένοι στη συνείδηση του ελληνικού λαού. Οι αμοιβές για το «έργο» τους είναι τέτοιες που δεν τους επιτρέπουν ούτε αναπαραγωγή ειδήσεων όπως αυτή της χώρας τρομοκράτη, της Τουρκίας!
Δείτε την είδηση:
Turkey violating Geneva Conventions using ambulances for weapons transport
Turkish ambulances are being used for the purposes of transporting weapons to terrorist groups in Syria, according to Russian news reports.
“Witnesses in Kushakli, Harran and Buculmez, towns bordering Syria, also have reported that ambulances are carrying arms to the Arab country and back, and are moving wounded to Turkey, as declared by the deputy of the province of Hatay, Mevlut Dudu” (see article: Captured terrorist in Syria confesses to having received training in Turkey http://english.pravda.ru/hotspots/conflicts/15-08-2012/121893-terrorist_syria-0/ ).
See article: Turkey uses ambulances to smuggle weapons into Syria: MP http://www.presstv.ir/detail/2012/08/09/255390/turkish-ambulances-take-arms-into-syria/
Under the Geneva conventions, you cannot target medical vehicles – it is a war crime!
The Geneva Conventions are a set of international rules that govern the treatment of prisoners, the sick and wounded, and civilians during war. Under the Geneva Conventions, for example, ambulances and military hospitals and their staff are officially “neutral and are not to be fired upon.”
Nearly all countries of the world have agreed to the Geneva Conventions, including Turkey, a NATO ally and military friend of the United States.
Article 1. Convention for the Amelioration of the Condition of the Wounded in Armies in the Field. Geneva, 22 August 1864 states:
“Ambulances and military hospitals shall be recognized as neutral, and as such, protected and respected by the belligerents as long as they accommodate wounded and sick” (source: http://www.icrc.org/ihl.nsf/full/120?opendocument ).
Turkey appears to be violating the Geneva Conventions in this regard by using Ambulances to transport weapons.
“The rules applying to ambulances or other ground vehicles are pretty straightforward”, said one Pentagon source, who refused to be identified in this report out of fear of being punished by higher ups.
“Like medical personnel, they “may in no circumstances be attacked,” but must be “respected and protected,” according to Articles 35 and 19 of the First Geneva Convention of 1949. They also should be marked with the Red Cross or Red Crescent emblem. They are subject to inspection and lose their protection, subject to a prior warning and a reasonable time limit, if they are used to commit acts harmful to the enemy that are outside their humanitarian duties. If these accounts are true, then Turkey is violating the Geneva Convention, plain and simple”, he said.
According to the U.S. State Department Turkey has received $21 billion dollars in aid from the United States, $14 billion of that in direct military aid (see article: TURKEY received $21 billion economic/military US foreign aid http://www.state.gov/r/pa/ei/bgn/3432.htm ).
We contacted NATO officials in Brussels, Belguim who refused “official comment” on Turkey’s blatant violations of the Geneva Conventions, calling the reports “baseless and unsubstantiated.”
Pravda.ru and PressTV officials however stand by their reports, saying they are both factual and accurate.
“examiner“
Την είδαμε στο Sibilla