Hundreds of families in Spain are evicted every day, after falling behind on mortgage payments – and under Spain’s draconian laws they must continue paying off the loan even after the home has been repossessed. Their main source of support is a determined woman from Barcelona – Ada Colau.

Back in 2009, when Colau organised the first meetings for mortgage defaulters, she was amazed to see hundreds of people turning up. But what surprised her even more was the way they behaved.

“We expected to see lots of angry people in the hall”, she says “but most were depressed and ashamed. They were embarrassed about discussing their problems. Our government kept telling these people that they were the ones responsible for this situation, that they were to blame. And that message was repeated every day on television.”

One of those who has sought support from Colau’s Platform for People Affected by Mortgages is Ermina Pacheco. As we walk to her flat past high rises and convenience stores, she tells me she began working at the age of 10 when her mother got her a job in a restaurant. Once inside I admire her collection of ceramic dolls and she shows me her wedding pictures. Ermina has been married three times and thought she’d finally found her soul mate. But two years ago the couple’s mortgage payments more than doubled from 800 to nearly 2000 euros a month. 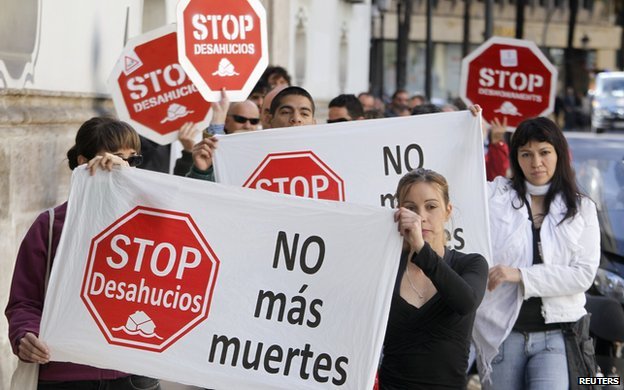 After the sudden price hike her husband became increasingly worried and couldn’t sleep at night. He became so depressed that he overdosed on painkillers and was admitted to a psychiatric hospital. “He stayed for a month but that didn’t help,” says Ermina. “He tried to commit suicide several times after that.”

She blames the banks and the government for destroying his peace of mind and eventually the marriage. “They pushed us to buy, saying why waste 100 euros in rent when you can have your own property? Now I feel that we were tricked.”

Ermina thinks her husband is still alive though she has no idea where he is today.

But many heavily indebted Spaniards have killed themselves. It was a wave of eviction-related suicides which prompted Ada to set up the Platform five years ago.

When the housing bubble burst, migrant workers in the construction industry and low-income families were the hardest hit. Today people from many different backgrounds have been sucked into the mortgage crisis. 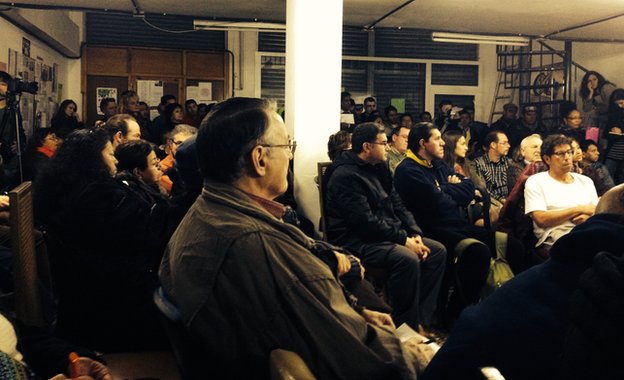 The Platform runs a network of local assemblies across the country

With unemployment at 26% – the highest rate in Europe except for Greece – people live in fear of losing their jobs. On top of that, many lose their homes.

“It is a real social emergency,” says Gerardo Pisarello a Barcelona based law professor and mortgage expert. “Spain has one of the worst housing policies in Europe.”

Unlike Germany, he says, there is no rent control to govern the private market and only 2% of housing is social housing – state subsidised homes for low-income families. This compares with about 20 or 30% in the Netherlands, Scandinavia, France and the UK.

Spain also has some of the toughest mortgage laws. People must continue to pay off their mortgages, complete with interest and penalty charges, even after they have been evicted and their home – whose value is appraised by the bank itself – has been repossessed. Since mortgage defaulters are disqualified from filing for bankruptcy, many are saddled with debts they can never escape. 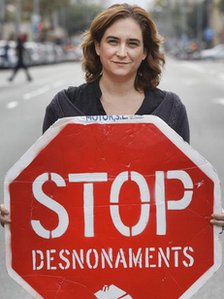 Colau’s platform has collected one and half million signatures calling for changes in these laws which make it virtually impossible for debtors to wipe the slate clean and start again.

Last March, the European Court of Justice ruled that Spain’s legislation was in breach of EU consumer protection laws because it did not allow judges to halt evictions, even if mortgage contracts contained unfair terms. These abusive terms, referred to by the court ruling, include high penalties for late interest payments and eviction for missing just one or two payments on a 30-year mortgage.

Apart from lobbying the government, the Platform runs a network of local assemblies where people can come for help. There are 65 in Catalonia alone and 150 across the country.

I go along to a packed out meeting in a large garage in a run-down part of Barcelona. Desperate and defeated looking people listen intently to the speakers and scribble notes.

As the microphone is handed around and person after person gets up to tell his or her story, the scale of Spain’s housing crisis becomes apparent.

A woman with a tear-stained face tells the meeting that her bank had initially promised she would pay no interest on the loan. Now she has been confronted with a steep bill and she is in a panic. “I will have to go back to Ecuador,” she says between sobs. “How can I pay thousands of euros worth of interest on a cleaner’s wages?”

The Platform’s activists chairing the meeting tell her not to give up and explain how she can get detailed legal advice. 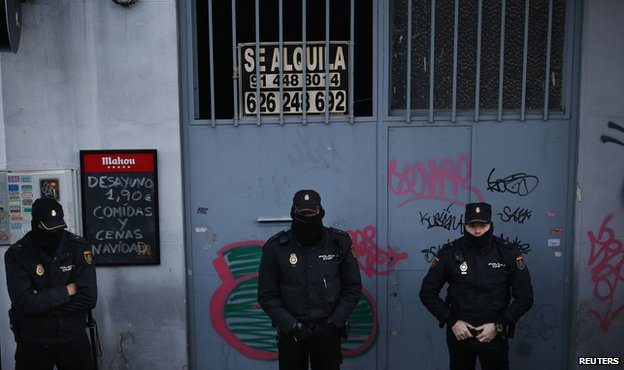 Police have been deployed to ensure evictions are carried out peacefully

Suddenly one of the activists reads a note handed to her and grabs the microphone. “Listen everybody! This is urgent,” she says. “There’s a family here that’s going to be evicted on Wednesday morning at 8am and we have to be there to stop that happening.”

Then she asks for a show of hands to see how many will support the direct action. There’s a noisy discussion about bus routes and the best way to reach the property under threat.

Most of the people here tonight are first-timers. They are encouraged to become members and stand outside endangered homes when the bailiffs turn up. These demonstrations staged by the Platform have already stopped around 1,000 evictions.

Across Spain, though, some 350,000 families have been forced out of their homes since the property market crashed in 2008.

Word about the Platform spread, together with Ada Colau’s popularity, when she appeared before a parliamentary committee on the mortgage. She reacted to a remark by a representative of the AEB, the Spanish Banking Association, by calling him a criminal.

The video went viral. Colau’s twitter followers leapt to one hundred thousand and the Platform’s website crashed. Her remark tapped into popular resentment about the role played by the banks which is deeply felt across the country. 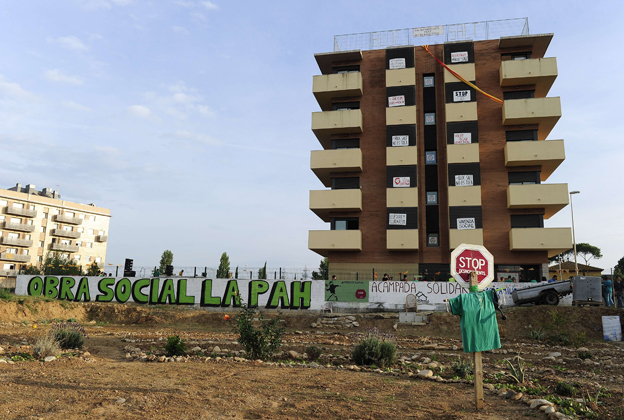 “He boasted that Spain has got the best mortgage system in the whole world,” she recalls. “I couldn’t believe it when it has caused so much suffering. It was an instinctive reaction but calling him a criminal was the least I could do!”

Juan Jose Toribio, an adviser to the Spanish Banking Association, says Colau’s attack on his colleague was unjustified.

Some banks or certain bank employees may have been at fault for lending to people who couldn’t repay. But we only realised that afterwards, when the recession came”

He says the banks stopped evicting the most vulnerable families in 2012. That change in policy came after a 53-year woman died jumping from her fourth-floor apartment in northern Spain, hours before she was due to be forced out of her home.

This new policy only suspends evictions for two years but the Platform says thousands of vulnerable families are still being made homeless. According to the Bank of Spain, evictions accelerated in the first half of last year when more than 35,000 Spanish homes were seized by banks for non-payment.

Toribio denies that the banks are to blame for the evictions crisis.

“Maybe the central bank set interest rates too low but people behaved irresponsibly when they borrowed too much. Some banks or certain bank employees may have been at fault for lending to people who couldn’t repay. But we only realised that afterwards, when the recession came. Before that it wasn’t so clear.”

Such arguments cut no ice with Ada. The platform has gone on to stage demonstrations outside the homes of politicians and bankers, and to occupy empty apartment blocks owned by the banks.

I visit one in the city of Sabadel, an hour from Barcelona. It is owned by Sareb, a financial entity created by the Spanish government and 40% funded by the taxpayer which allows private banks to get rid of property they cannot sell.

The building, now home to several families, has both water and electricity. As Juan Mente, one of the new residents, shows me his sleek kitchen, I wonder if it is fair that he pays no rent?

“These flats were partly paid for with taxpayers’ money, so we have a right to be here,” he says. “Anyway it makes no sense to have thousands of empty flats while people, including sick people and children, are living on the street.”

He and his wife would be willing to pay a fair rent calculated according to household income, he says, but the banks and Sareb refuse to negotiate.

Ada Colau, who has been called a “Nazi” by some members of Prime Minister Mariano Rajoy’s Popular Party, and “an angel” by her supporters, says she fits neither description.

“I’m not particularly intelligent, I’m not powerful. I’m just a normal person and that’s what worries them most. It just shows how much power normal citizens can have,” she says.

When I ask if she is a thorn in the side of the government, she gives a throaty laugh. “In Spain we have another expression – a grain of sand in the bum! But we will never give up our fight for justice – that is absolutely certain.”